Some cookies used are essential to providing a service, while others help us improve your experience and provide us with insights into how the site is being used.

Necessary cookies enable core functionality such as security, network management, and accessibility. You may disable these by changing your browser settings, but this may affect how the website functions.

We'd like to allow Social Media cookies to provide a richer experience. These cookies will allow us the ability to list Fife Council tweets and Facebook posts, Google maps, audio clips & Videos on some of our pages. Our videos use Youtube's privacy-enhanced mode.

What are they made of and why is this important? 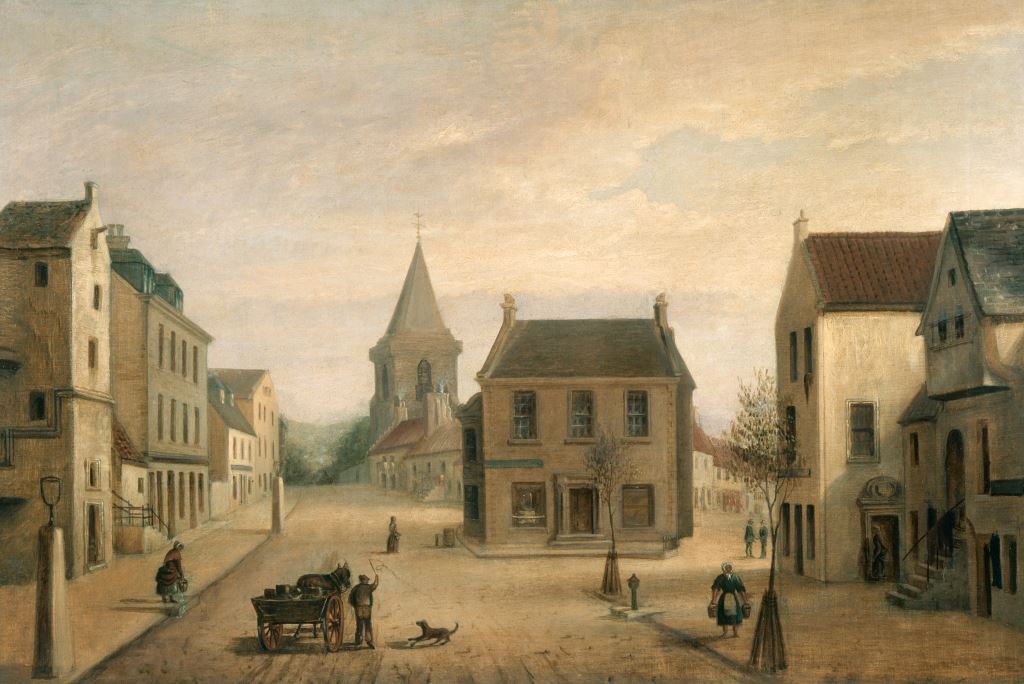 Inverkeithing has a rich history and heritage, dating back many centuries. To protect and enhance the charm of the town centre for the future, it is vital that the historic buildings are cared for properly.

In 2020 the Inverkeithing Heritage Regeneration project commissioned the Scottish Lime Centre Trust to carry out a stone and slate survey of the historic centre of Inverkeithing. The survey report outlines the condition of the traditional buildings (those built before 1919) and their main repair and maintenance needs. It also identifies suitable matching stone, slate and mortar for use in repairs.

The survey report is available on the Fife Historic Buildings Trust website. It is a useful resource for contractors, specifiers and property owners. 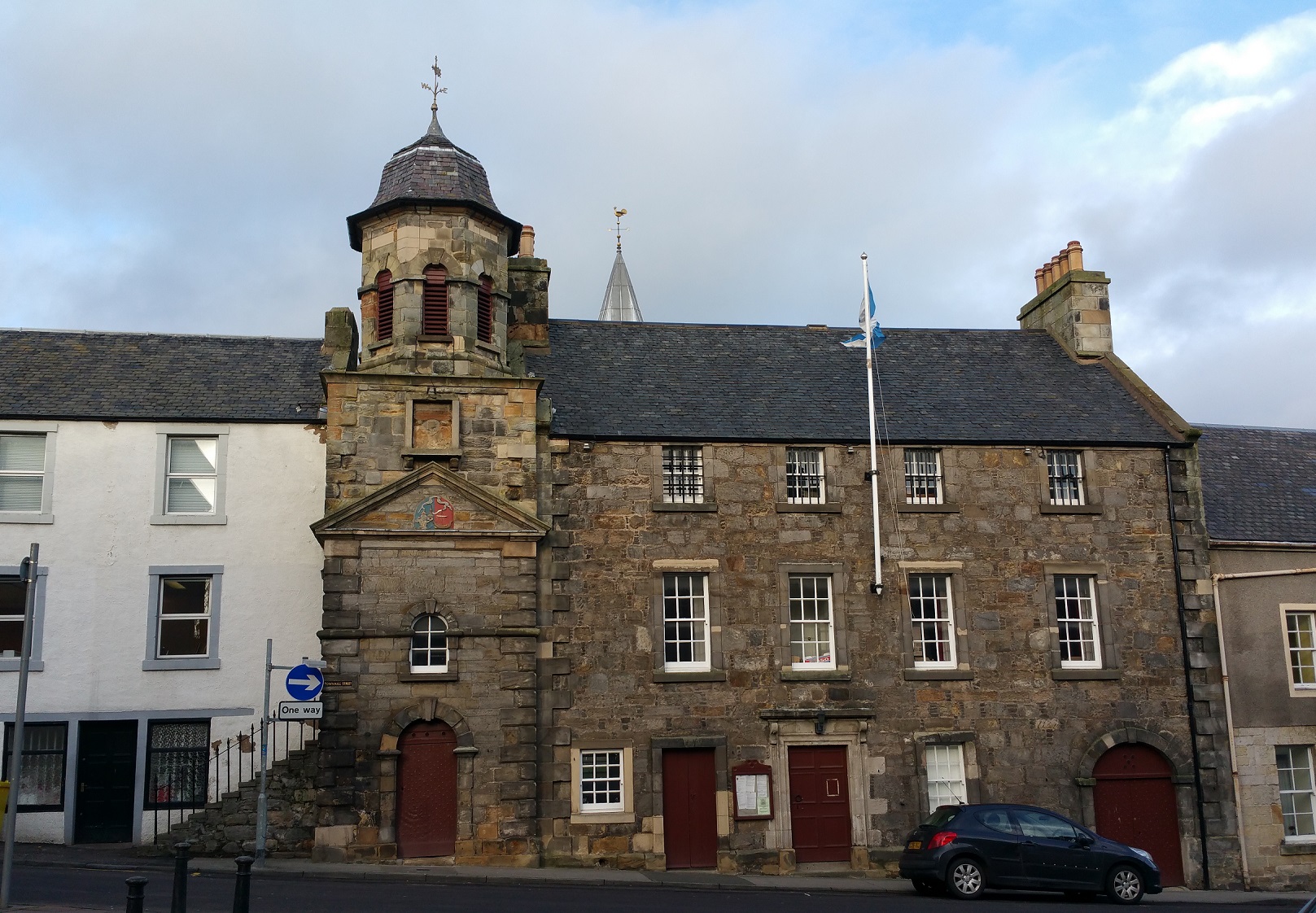 Traditional buildings within the Inverkeithing Conservation Area are built using a small range of different stone types. Each stone type differs in its colour, texture, and mineralogy (the physical and chemical structure). There are three main sandstone types and one whinstone. The most common sandstone type used in Inverkeithing is a local buff or grey coloured sandstone. This is found in some of the oldest buildings in the town, including the 18th century Town House.

The second most common sandstone is found in a number of buildings towards the south of the Conservation Area, including 54 High Street . This masonry is often painted, probably to hide the extreme type of weathering the stone exhibits. Unfortunately, modern masonry paints can cause further damage by trapping moisture in the stone.

The third main sandstone is a high quality, buff coloured sandstone. This stone shows less obvious decay than the other two types. It is found on a number of buildings, including 14 High Street.

Whinstone (dense igneous stone) is used in buildings and boundary walls, as pinning stones, and for paving. Sandstone and whinstone rubble boundary walls are a feature of the conservation area. 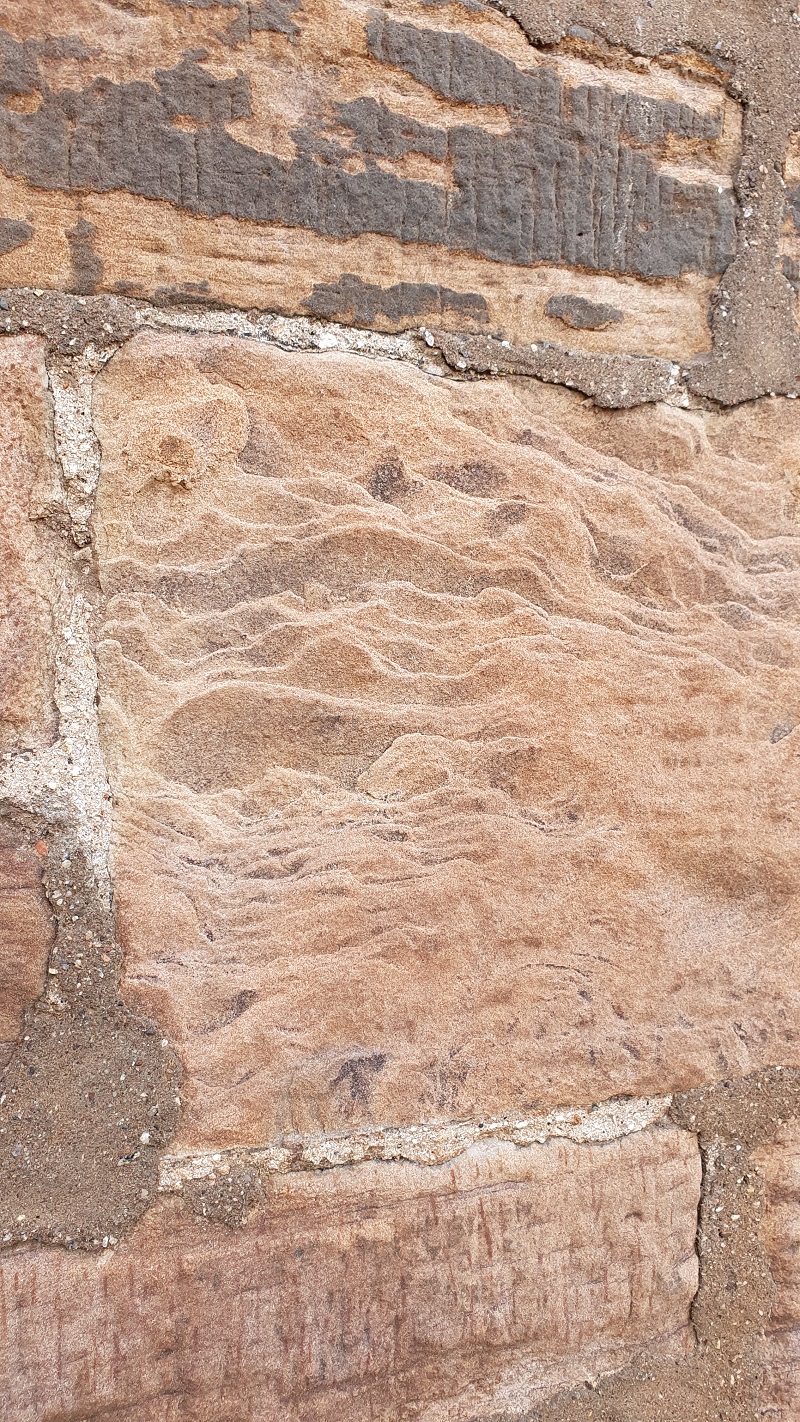 (Below left: Whinstone cobbles behind the Half Crown pub. Below right: Dark whinstone with lighter sandstone dressings can be seen at 29-33 High Street) 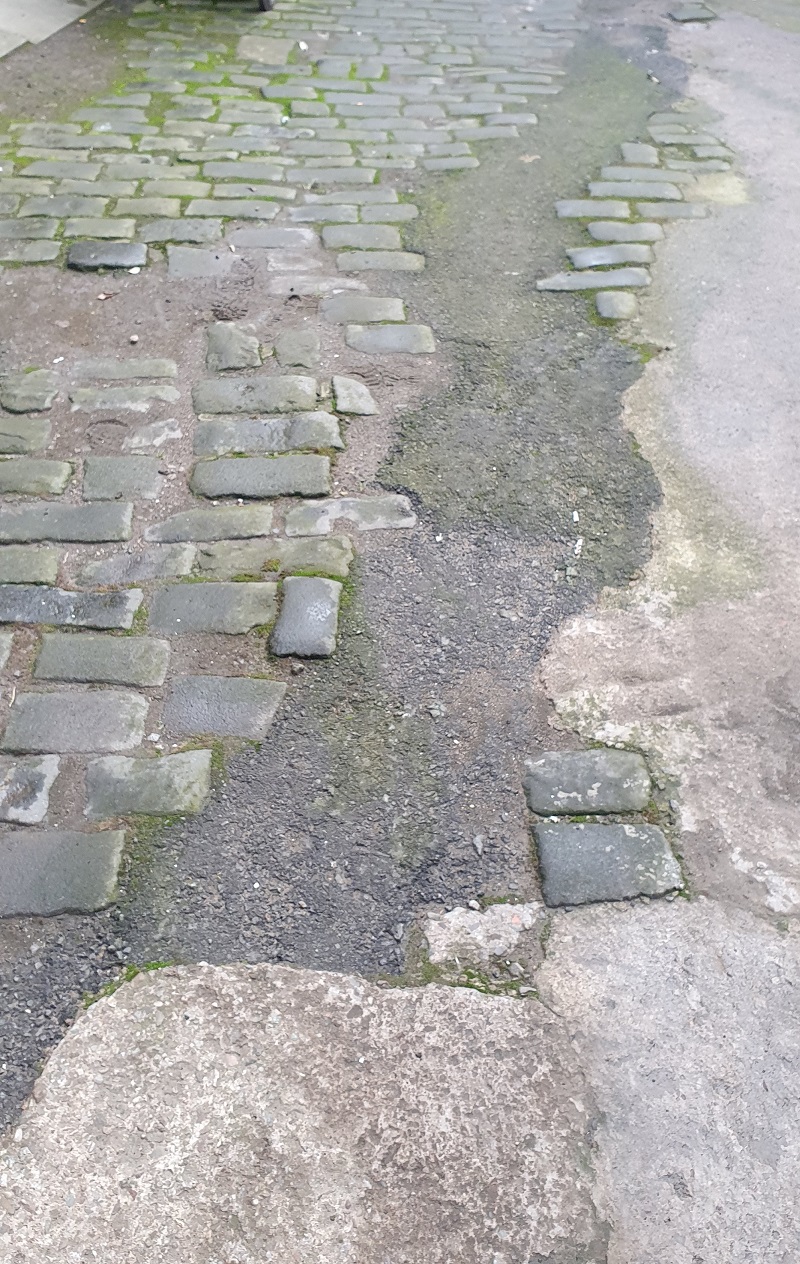 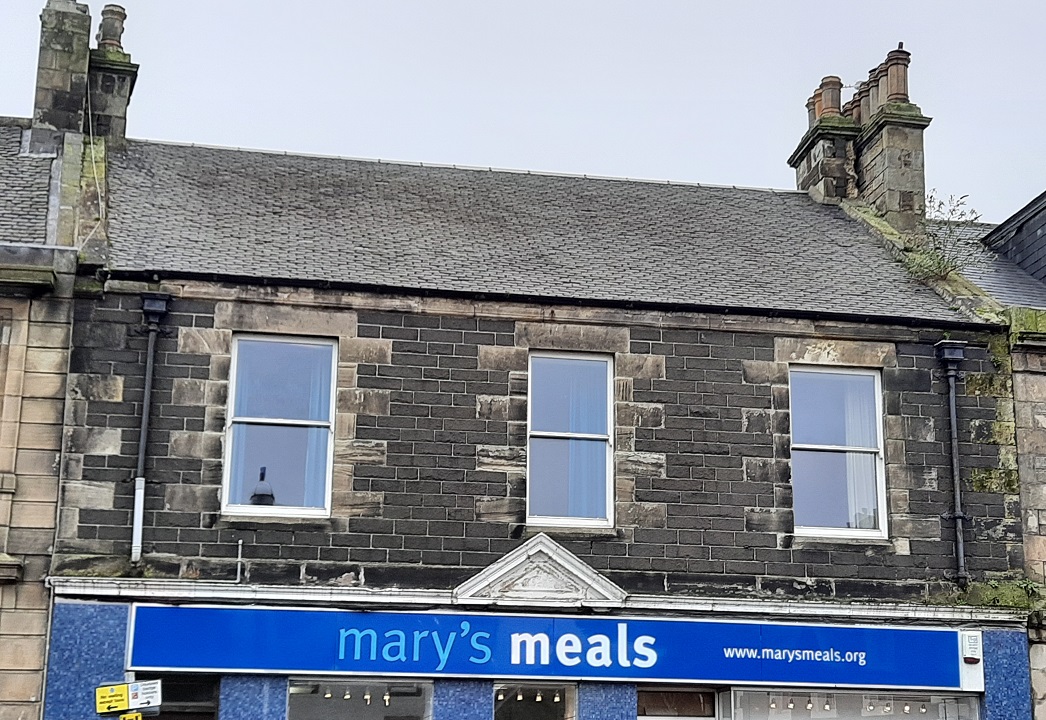 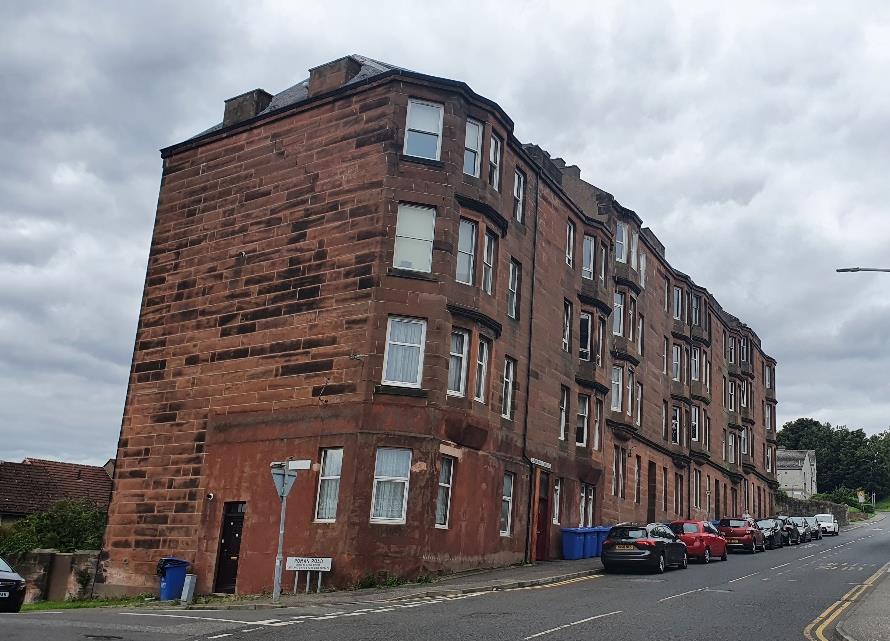 Other stone types are also found in Inverkeithing’s traditional buildings. On Hill Street, outside the Conservation Area, there is a red sandstone tenement building. Red sandstone was popular in the 19th century.

There were some local sources of red sandstone in Fife, but the main quarries were in Dumfriesshire, Ayrshire and Arran. 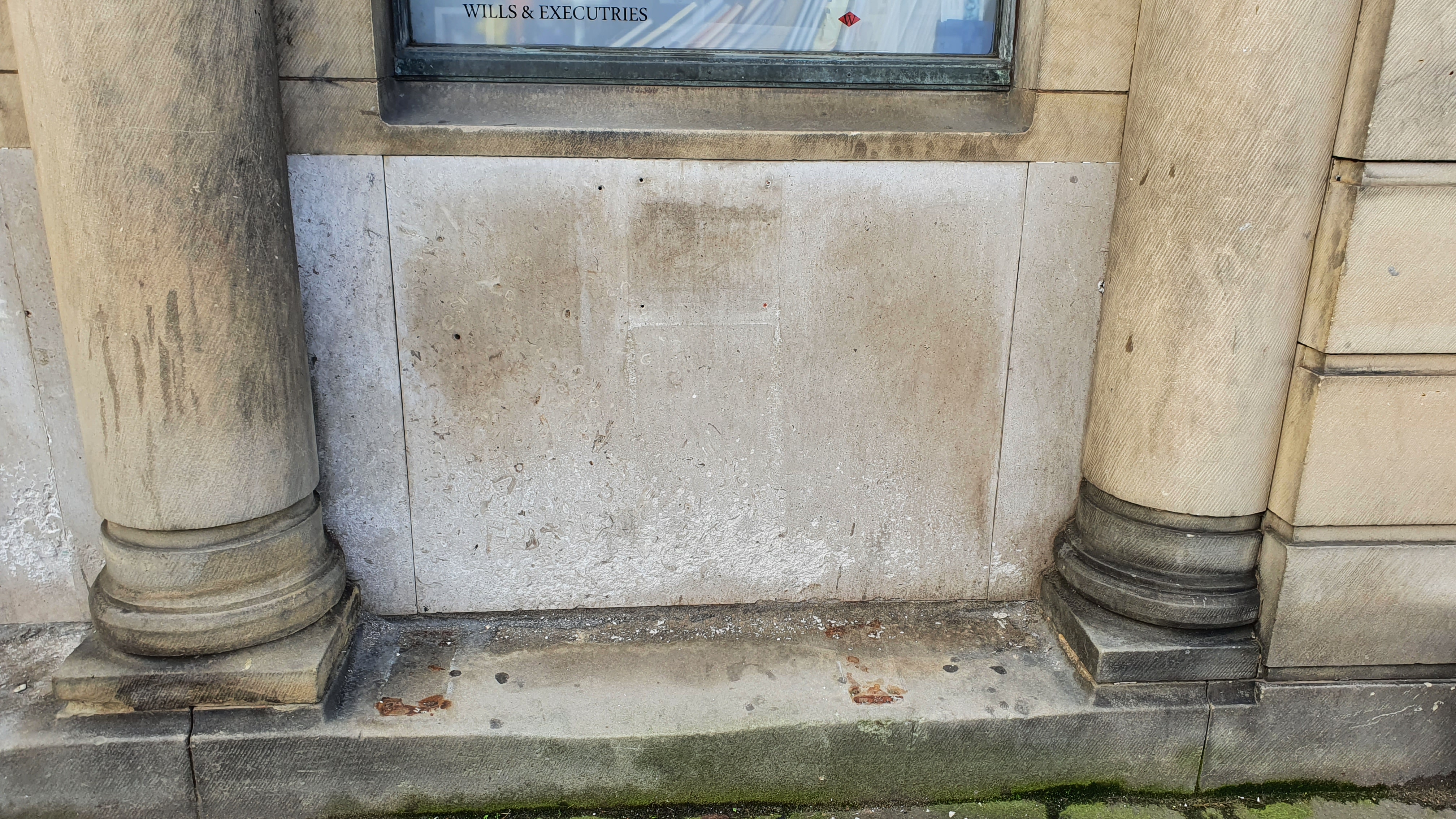 35 High Street was designed by the architect John Ross McKay in 1934 for the National Bank of Scotland. It has limestone cladding panels, to display wealth and status. The limestone was probably quarried in Dorset in England.

Slate is the main roofing material used in Inverkeithing, although historically many of the roofs would have been thatched or pantiled. Most of the slates are traditional Scottish slates, which are relatively small and thick compared to modern, imported slates. Traditional Scottish slate is usually laid in ‘diminishing courses’, with larger slates lower down the roof and smaller slates higher up.

(Above left: Scottish slates is laid in diminishing courses. Right: Sandstone and whinstone rubble boundary walls can be seen around Inverkeithing. This one is in Port Street)

To identify Inverkeithing’s stones, stone cores were taken from a representative sample of buildings.

These were analysed in the lab to identify the unique characteristics and properties of each stone sample, including colour, density and water absorption. Local mortars and sands were also analysed.

The stone samples were compared against samples taken from historic quarry sites to identify the original source of the stone. They were also compared against data from quarries that are currently in operation, to identify suitably matching stones that can be used in masonry repairs today. This is important because incompatible replacement stone can damage the surrounding masonry and look unsightly. The detailed report about this analysis is available on the Fife Historic Buildings Trust website under the Inverkeithing project.

There are three main phases of building materials used in Inverkeithing’s traditional buildings. Building repair and maintenance in Inverkeithing: problem areas and solutions

Natural stone is a durable material and can last for centuries. However, concentrated areas of water saturation and regular wetting and drying cycles can weaken its structure, speeding up the process of decay. Therefore, it is important to keep traditional buildings dry and well-maintained.

Some common repair and maintenance issues have been identified in Inverkeithing:

The stone in Inverkeithing is in quite good condition, although there are some areas of severe decay, especially in exposed areas. 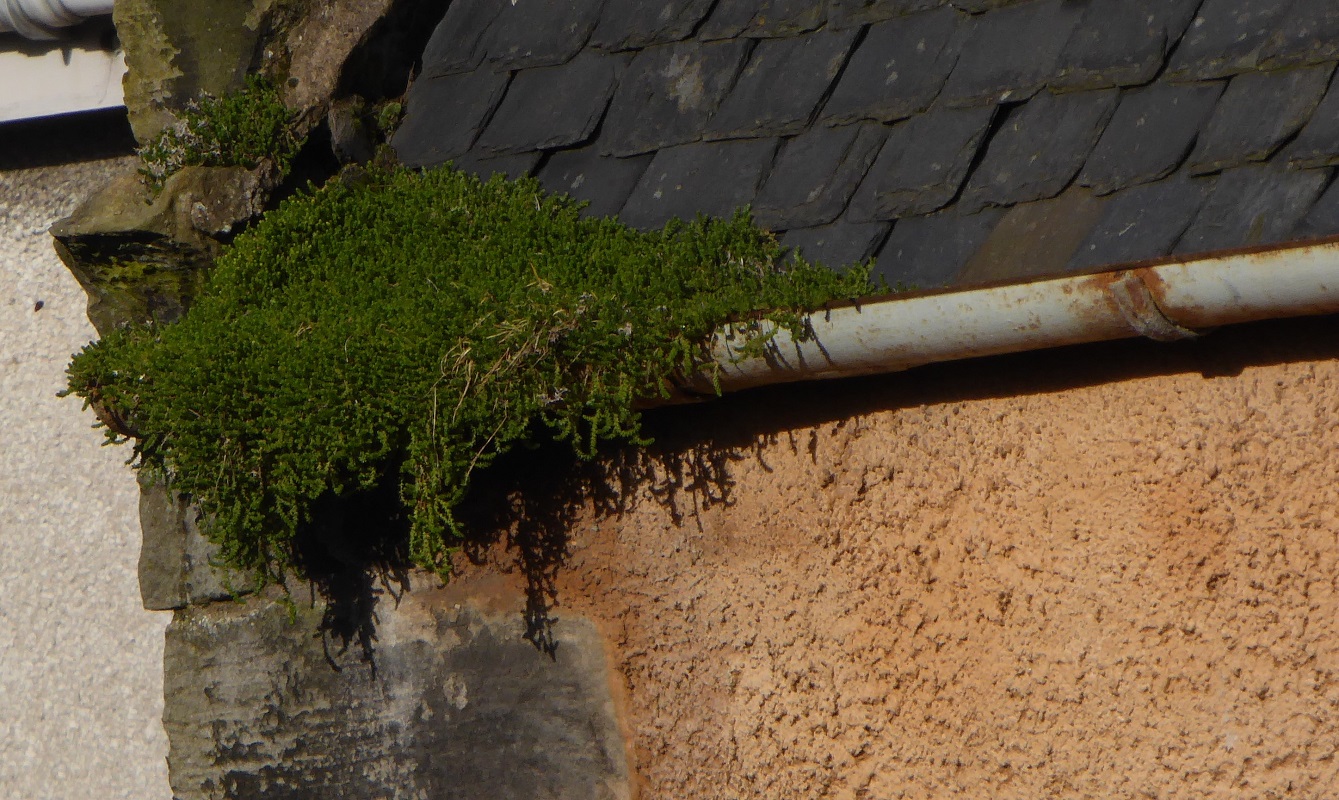 Many modern masonry paints create a surface film, trapping moisture within the stone below. These paints should not be used on traditional buildings.

Limewash, lime paints or mineral paints may be suitable alternatives. Paint removal is a specialist task and should be undertaken by experienced contractors to avoid further damage to the stone.

Lime mortar – a traditional mortar, used to fix stones in place. Lime is more flexible and ‘breathable’ than modern cement.

Limestone – a sedimentary rock composed predominately of calcium carbonate. Historically it was burned for use in the building industry, and for fertiliser.

Limewash - a traditional finish for stone and brick buildings, applied either directly onto the masonry surface or to lime harling, render or plaster.

Pantile - a traditional roof tile with an S-shaped profile, made from fired clay.

Pinning stones - small stones used in masonry walls to secure the larger stones and reduce the amount of mortar required.

Sandstone – a common sedimentary rock consisting of sand (predominantly quartz), normally cemented together by silica or carbonate minerals. Commonly used throughout Scotland as a building stone.

Slate – a fine-grained, foliated, homogeneous metamorphic rock which has a natural cleavage, allowing it to be easily broken into thin sheets. Commonly used for roofing.

Whinstone – a term used in the construction industry to describe any crystalline, hard, dark coloured rock. In Scotland, most whinstones are igneous rocks such as basalt or dolerite.

The Inverkeithing Heritage Regeneration project is managed by Fife Historic Buildings Trust on behalf of Fife Council and is funded by the National Lottery Heritage Fund and Historic Environment Scotland.